“The TP-Link Deco XE75 delivers exceptional performance for 60% of the cost of competitors.”

For the past several years, Wi-Fi 6E in the home was an upgrade reserved for those with deep pockets. With initial Wi-Fi 6E mesh systems priced well in excess of $1,000, these routers were largely out of the reach of the average person. Fast-forward to 2022, and we’re starting to see a seismic shift that should help with adoption of Wi-Fi 6E mesh systems and home routers.

Eero’s Pro 6E, for example, delivers solid performance at a significant discount compared to early entrants in the space. Now, TP-Link is shaking up the Wi-Fi 6E mesh market with the even more affordable Deco XE75 mesh network.

Starting at just $299 for a two-pack system, the TP-Link Deco XE75 promises Wi-Fi 6E speeds and performance at just one-fifth the price of Netgear’s three-pack Orbi system. Arguably, this makes the Deco XE75 a more reasonable upgrade for those who want Wi-Fi 6E without breaking the bank. And for the most part, TP-Link does a fantastic job of delivering the level of performance that matches rival systems costing five times as much.

Like most modern mesh systems, the Deco XE75 boasts a simple, modern, and minimalist design, consisting of a tall and slender cylindrical shape with a clean matte white finish accented with glossy black trim. It’s unassuming and unobtrusive when you have the Deco XE75 scattered throughout your home, and that’s a good thing. Unlike traditional routers that are typically hidden behind shelves or in cabinets, mesh networks perform best when they’re placed in plain view so that the signal doesn’t get obstructed.

At 4.1 inches in diameter and 6.7-inches tall, the XE75 is a little bit more compact than the 11.1-inch tall Orbi RBKE963, but it still occupies more space in the home than the diminutively compact Amazon Eero Pro 6E, which stands at just 2.1 inches tall and has a slightly larger 5.3-inch squared footprint.

Still, TP-Link didn’t deviate much from its traditional mesh design. The overall aesthetic of the Deco XE75 is very reminiscent of the Deco S4, which comes with older Wi-Fi 5 technology, and it’s a bit taller than the Deco X60 and X55.

The taller height is likely to accommodate a tri-band AX5400 connection, which comes with a new 6GHz band that serves as a dedicated backhaul to improve performance. TP-Link claims that in total, the design can support up to 200 devices with speeds up to 5,400Mbps. At 5.4Gbps, the Deco XE75 is not the fastest Wi-Fi 6E modem you can buy –- the Orbi RBKE963 can achieve twice that speed, but at a cost five times greater than the TP-Link device.

The clean design comes with a glossy black, circular grill-shaped plate on top that’s reminiscent of older smart speaker designs and a vertical layout of three Ethernet ports and a power jack on the rear. The ports provide Gigabit speeds for wired connection, but unlike more premium Wi-Fi 6E routers, you won’t get multigig speeds.

Given that multigig broadband plans are beginning to take off in the U.S., this seems like a big miss for futureproofing. A single LED light adorns the bottom front, which can be toggled within the app, to give you a visual indication of your network status at a glance.

TP-Link advertises that a two-pack XE75 system can blanket homes as large as 5,500 square feet with reliable Wi-Fi signal.

While those who have never set up a router before will appreciate TP-Link’s app-based setup process, more advanced users with networking experience will likely find the simplicity a little too basic. Like its modern home-based contemporaries, the setup process for the Deco XE75 is handled entirely by the app, which guides you on how and when to connect the modem and nodes. It’s foolproof, effective, and easy, which should please most users. More advanced networkers will likely want additional settings and configurations available to them through a web-based portal. 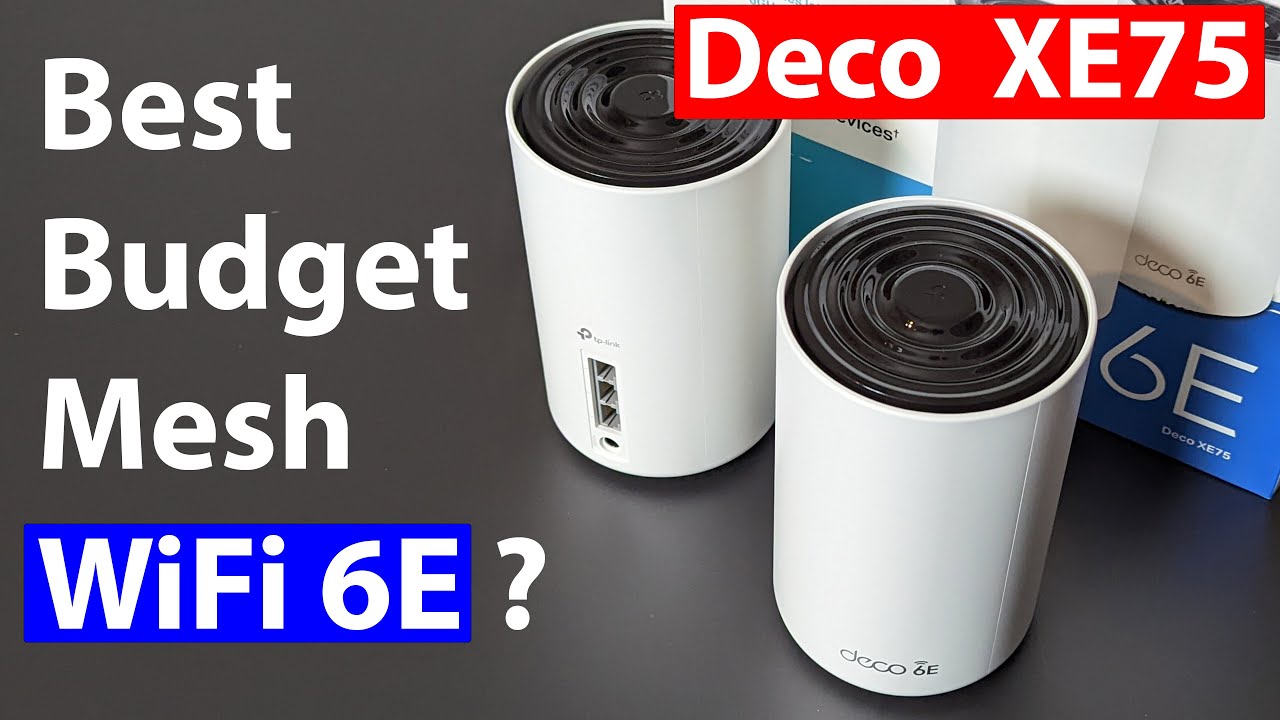 Plugging in the Deco will prompt the front LED light to glow yellow. The light will change color and blink depending on the status of your network to give you a visual indicator of what’s happening if you don’t want to check the app. Once the Deco is plugged in, you’ll want to launch the app and begin the setup process by selecting the Deco model from the list. In this case, it’s the Deco XE75. The TP-Link app, which is available as a free download for iOS and Android devices, will guide you through the process.

Through the app, you can add more satellite nodes to help improve coverage. You should also be able to mix and match nodes from TP-Link’s Deco collection. In theory, as long as you have one of the two Deco XE75 units plugged into your modem and serving as a router, you can have a main Wi-Fi 6E network that can be augmented with Wi-Fi 6E, Wi-Fi 6, or even Wi-Fi 5 nodes in different areas of your home. When you move around the home, the system should automatically route your connection to the closest node or the one with the strongest signal.

This automated routing is powered by TP-Link’s AI-driven mesh. It’s basically marketing parlance for beam steering, and the whole thing is driven by artificial intelligence via the built-in 1.7GHz quad-core processor on the device.

Performance of the XE75 will vary depending on your home size, layout, and materials used in the construction of your space. Keep in mind that Wi-Fi performance will degrade as it traverses through thick materials, like heavy walls, metal reinforced doors, and even furniture like thick bookshelves.

I tested the Deco XE75 in a split-level two-bedroom townhouse that measures 1,300 square feet. While a one-pack configuration would have sufficed for my compact setup, I did use both units in the two-pack review sample that was sent to test performance. The main unit was connected to the router, which was placed in the living room on the first floor of the townhouse in the front of the house, while the second unit was placed in a bedroom upstairs in the rear of the home. My home broadband plan is 600Mbps, and I get approximately 620Mbps when wirelessly connected directly to the modem from a distance of five feet away.

When I connected a single Deco XE75 router to my network, I got approximately 600Mbps from the living room on my Wi-Fi 6E-enabled Samsung Galaxy S22 Ultra smartphone.

If you can live with TP-Link’s simplified app, the Deco XE75 delivers nearly identical performance for about 60% of the cost of a comparable two-pack configuration of the competing Eero Pro 6E. This makes the Deco XE75 a winner, especially for homes on a budget. There are some differences, however, so if you’re picky and less price sensitive, your decision can be swayed by important features.

Performance on both the 5GHz and 6GHz bands was notably strong across my home in various tests, and my devices benefited from the fast performance of the XE75. With the Deco, TP-Link offers some flexibility on how the 6GHz band can be used. In addition to the 2.4GHz and 5GHz band, the 6GHz band can also be used for device connections or as a dedicated backhaul. What’s lacking, however, is the ability to set your channels, which limits the customization you can get out of the router.

Though speeds were regularly great throughout my relatively small living space, the Deco XE75 did struggle in a few areas. First, I found signal strength a bit weak going through metal-reinforced doors. For example, if you have a smart doorbell camera mounted on the outside, you may want to invest in an extra node that’s placed within close proximity of your door or consider moving the router near your door to help with signal penetration. In my test, when the door was closed, the video feed from my smart doorbell could sometimes cut out or stutter. When the door was opened, the video feed was smooth.

Similarly, the signal also suffered from the main router going through the attached garage. I have a smart camera mounted to the outside of my garage door, and that camera also struggled to connect. Moving a node to the inside of the garage significantly helped with signal issues. These experiences weren’t unique to the Deco XE75, as connections and signal penetration struggled on other routers and mesh systems that I’ve tried in the past. However, I did notice that for a Wi-Fi 6 or newer product, the Deco XE75 struggled a bit more than competitors in its class. Your experience will vary based on your home’s layout, construction, and placement of the routers and nodes.

Wi-Fi 6E has largely been priced out of the reach of the average household, and there are relatively few noteworthy benefits compared to Wi-Fi 6, but TP-Link makes a valiant effort to rewrite that narrative. The Deco XE75 is a capable Wi-Fi 6E mesh system that delivers on its promise of ease of use while still being the most affordable option on the market at this time.

Are there any alternatives?